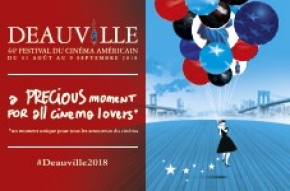 Air France and Delta Air Lines are the official airlines of the 44th annual American Film Festival in Deauville for the fifth consecutive year. The world’s largest celebration of American cinema runs until September 9, offering round-the-clock screenings of both modern Hollywood and independent movies.

Air France and Delta are bringing Hollywood glamour to the famous beach chalets of Deauville with 20 weekly flights between Los Angeles and Paris-Charles de Gaulle, including Delta’s new nonstop service, which launched in June 2018. In addition, customers benefit from connections to Los Angeles from destinations across Europe, the Middle East, Africa and India via the Paris-Charles de Gaulle hub.

Customers also have optional access to high-speed Wi-Fi and can keep in touch with friends, family and colleagues at 30,000 feet thanks to free mobile messaging.

Delta One customers can sit back and be entertained while enjoying menus created by celebrated Los Angeles chef duo, Jon Shook and Vinny Dotolo from Jon & Vinny’s. Their famous L.A. fare is served on select routes from the city, including Paris.

More than 1,200 hours of inflight entertainment in Air France cabins

With over 38,000 seats equipped with in-seat video screens on long-haul flights and more than 1,200 hours of programming each month, available in 12 languages, Air France is one of the world's biggest cinemas! The company offers movies, TV shows, cartoons, newspapers, magazines and music available on board from 30 hours before departure on Air France Play.