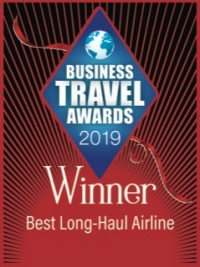 Delta’s year is off to a strong start in the U.K.! The airline beat off competition from a number of global carriers to take the title of ‘Best Long-Haul Airline’ at the Business Travel Awards held in London on January 21st, 2019.

One of the U.K.’s highest-regarded industry accolades, the Business Travel Awards are judged by a panel of travel experts alongside Buying Business Travel magazine’s editorial team. The judges called out Delta’s innovation in biometric and facial recognition, saying its on-time performance, profitability and global outlook stood out when making their decision. Other airlines shortlisted for the award included American Airlines, ANA, Etihad, Japan Airlines and Lufthansa.