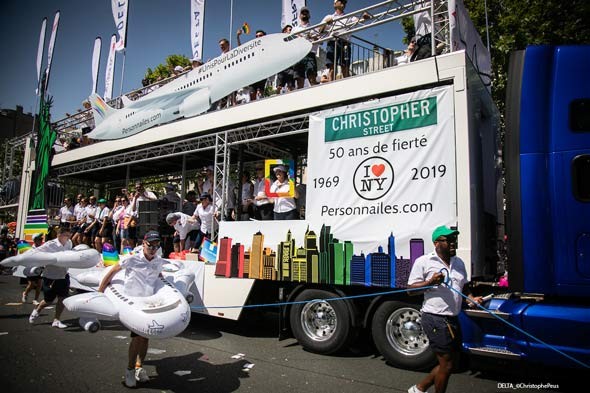 More than 120 employees from Delta and joint venture partners Air France, KLM and Virgin Atlantic donned rainbow colors and took to the streets of Paris to join the Pride celebrations on Saturday, June 29th.

Under the motto “#Unis pour la Diversité” Delta and its trans-Atlantic JV partners pumped up the party on a huge, double decker float, complete with aerial DJ and live music, and even wearable aircraft. Paris Pride was the first time the partners have joined forces to celebrate diversity, a cause at the heart of each airline.

As the mercury hit 37 degrees Celsius in the French capital, around half a million people braved the heat to march in support of global LGBTQ+ rights along the 5.5km route. And although the asphalt may have melted in places on the roads, firefighters kept revelers cool with handy hose-downs along the way.

Delta is supporting Pride events in cities including Salt Lake City, Boston, Detroit, Los Angeles, Cincinnati, Minneapolis, Seattle, London, Atlanta and New York. The airline also sponsors groups who are leading the fight, like the Human Rights Campaign, as well as the Gay & Lesbian Alliance Against Discrimination, the National Gay Pilots Association, International Gay & Lesbian Travel Association, and Chris 180. It’s one of the reasons Delta was recognized as a “Best Workplace for Diversity” by Fortune for three years in a row.