Look up this month and you might just catch a glimpse of pink, as Delta’s iconic Pink Plane takes to the skies to help raise awareness in the fight against breast cancer. 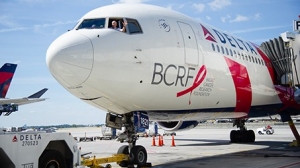 Delta’s Pink Plane – a Boing 767-400 - has flown 36 million miles to 28 countries across the world including the U.K., Ireland, France, Spain, Italy, South Africa, Russia and Greece.

Each October, Delta kicks off a month-long campaign to generate awareness and money for BCRF. Flight attendants and gate agents wear pink uniforms during the month, while pink items are sold on board to raise funds.

On board, there are pink Tumi kits, pink headsets and cans of SweetWater 420, that feature a pink design during the month of October.

Worldwide, Delta employees and customers have been united in their passion for the work of the Breast Cancer Research Foundation since 2005.

Since its partnership with BCRF started in 2005, Delta and its employees: