Secrets of a Sommelier: Andrea Robinson Shares Tricks of the Trade 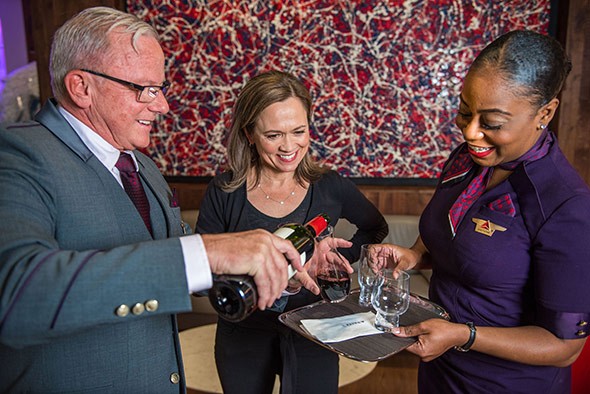 Master Sommelier Andrea Robinson sat down to dish on all things wine – from favorite pairings and guilty pleasures to the behind-the-scenes work that goes into picking the best pours for Delta's wine program.

The brains behind Delta's wine selections since 2007, Robinson is one of only 33 women worldwide to hold the title of Master Sommelier. She is the first woman ever designated as the Best Sommelier in the U.S. by the Sommelier Society of America and is the winner of three James Beard awards. She is an honors graduate of the French Culinary Institute, and in 2004 was also named Wine and Spirits Professional of The Year by Bon Appétit.

Tell us about how you first became interested in wine. What was your "Aha!" moment?

You know, it's funny. I wanted to be a performer growing up. I always saw myself pursuing acting or something like that. Turns out, that prepared me well for being a sommelier — it's all about telling a story on your feet in real-time. I think the "Aha!" moment for me was a wine tasting class in college. I realized that somewhere along the way, I had fallen in love.

When did you first get introduced to Delta? What did you think?

I met the Delta team just as the company was emerging from bankruptcy. They were gearing up to launch a new product called "BusinessElite" and were looking for the right partner to help shape their wine program. They were looking for someone with the right credentials, but also the right personality. Someone who could make wine approachable for anyone.

I knew, or strongly suspected, that the notion of wine at altitude could be difficult, but I certainly didn't understand that fully at the beginning. I had a lot to learn, but I was up for the challenge.

Are there any common wine myths out there, or secrets only a sommelier would know?

Wine doesn't have to be expensive to be good. That's just not how it works! Wine is a personal preference and different wines fit the bill for different circumstances. It's all about finding what's right for you.

Also, the whole "red with meat, white with fish" adage doesn't always ring true. There's some sound logic there, but it's not a hard and fast rule. I always say to pair with the prep, not the protein. Protein is a blank canvas. If you're preparing a fish dish with lots of tomatoes, garlic, onions and so on — why not pair with a light Italian red?