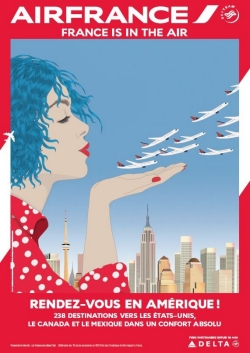 Delta and Air France are celebrating the 10th anniversary of their successful joint venture partnership with an advertising campaign highlighting the airlines’ shared network from France.

The airlines’ first jointly branded campaign uses classic Air France imagery to bring a French touch to a background blending New York and Tonroto’s iconic skylines.  Posters will appear throughout the Paris Metro and in newspapers and magazines.

Together, Delta and Air France operate more than 30 daily flights between Paris-Charles de Gaulle and North America, with flights to 238 destinations across the United States, Canada and Mexico.